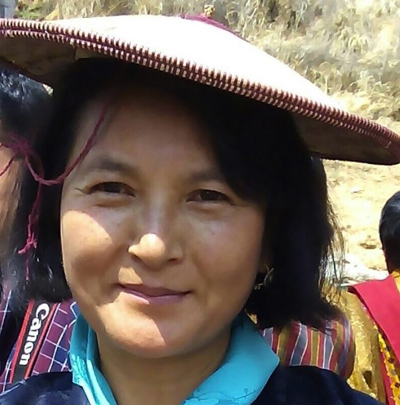 The initial concept for creating the Bhutan Nuns Foundation emerged from Dr. Tashi Zangmo’s 2005 Ph.D. thesis at the University of Massachusetts, Amherst.

Her educational journey began at the age of nine, as the first girl from her remote eastern Bhutan village to receive an education. The third youngest of eight children in her family, it was a day’s walk from their home to the only school in Wamrong, where she boarded – initially as the only girl – until sixth grade. She then continued her studies in Thimphu, Bhutan’s capital, and worked as a government secretary before enrolling in the Centre for Higher Tibetan Studies in Varanasi, India.

From there, in 1995 she earned her first B.A. degree in Buddhist Philosophy. When the opportunity to study in the United States came about, she continued her education at Mount Holyoke College in South Hadley, Massachusetts, graduating with a second B.A. degree in Developmental Studies in 1999.

Continuing with graduate M.A. and Ph.D. studies, her work considered the status of women and nuns in Bhutan, now in the context of internationally recognized development goals, and related to gender equity. Her 2009 doctoral thesis, entitled “Women’s contribution to gross national happiness: A critical analysis of the role of nuns and nunneries in education and sustainable development in Bhutan”, drew on feminist and critical discourses in examining the quality of learning at nunneries, and proposed specific recommendations and programmatic actions to address the situation.

Returning to Bhutan and building upon her academic work, Dr.Zangmo was able to found the BNF charity under the patronage of the Queen Mother, Ashi Tshering Yangdoen Wangchuck. Today, ten years later, the foundation’s support of nunneries, and educating female monastics has greatly contributed to empowering women, and therefore to achieving Bhutan’s overall development goals.